The NHSI champion, Mater Dei High (Santa Ana, Calif.), made the biggest jump. The Monarchs climbed 13 spots to No. 5 despite splitting a doubleheader upon their return to Southern California.

The staffs of Baseball America and the NHSBCA compile the Top 25 rankings. In-season polls will be conducted every two weeks and released every other Tuesday throughout the season. Records indicated are as of April 8 and do not include ties.

Team USA San Diego will be holding tryouts for the 31st World Boys Baseball Tournament. We will be traveling to Australia in August. All players must be born after April 1 1996. Tryouts will be held Sunday Jan.15th – 1pm at East Clairemont Athletic Field.
Please call Mark Wilson 858-361-9344 for any questions.

Following some intense training evaluation and 5-day trials, USA Baseball has finally announced the 20 player roster for the 2011 18U National Team.  From Catagena, Colombia November 17-27, the 18U team will compete in the 2011 COPABE ‘AAA’/18U Junior Pan American Championships.  The team will be coached by former MLB player Scott Brosius.  We are thrilled to see nine of the players traveling to Colombia in November have come through the Baseball Factory program.  We would like to congratulate the following players on this outstanding achievement:Alex Bregman (SS), Chase DeJong (RHP), Cole Irvin (LHP), Carson Kelly (3B), Jeremy Martinez (C),Nelson Rodriguez (C), Addison Russell (IF), Mikey White (SS/2B), and Jesse Winker (OF).

Alex Bregman hails from Albuquerque, NM and was the first ever youth player to win USA Baseball’s Player of the Year honors.  He led the 16U National Team to a Gold Medal in the Pan Am Championships and was an Under Armour Baseball Factory Pre-Season All-American in 2010 and 2011.  Chase DeJong is a two-way player who has developed as a pitcher and an outfielder.  The Long Beach, CA native was selected to the Team One West Showcase this past July.  Cole Irvin, a pitcher from Yorba Linda, CA participated in this year’s Under Amour All-American Game, powered by Baseball Factory and has committed to Oregon.  Carson Kelly, from Portland, OR, is a two-way player who can buckle hitters with his breaking ball and hold his own in the field as well.  He was a member of the 16U Gold Medal team, was an Under Armour Pre-Season All-American in both 2010 and 2011 and played in the 2011 Under Armour All-American Game, powered by Baseball Factory.  Jeremy Martinez, a catcher from Mater Dei High School in Santa Ana, CA, was also a member of the 2011 Under Amour All-American Team.  He is a talented young catcher and has committed to USC.

Nelson Rodriguez is a catcher from the Big Apple with a big arm.  He went to George Washington high school and has some power at the plate.  Addison Russell, from Pace, FL, was a 2010 Under Armour All-American and has a lot of potential.  This infielder is projected to be one of the best players in 2012 and has made a commitment to Auburn.  The University of Alabama has a commitment from Mikey White, a hometown shortstop from Hoover, AL.  The 2011 Under Armour All-American has some great skills in the field and is a solid hitter as well.  Jesse Winker is an outfielder from Windermere, FL.  He demonstrated a strong, accurate arm in his performance in the 2010 Team One Futures Game and will excel at the University of Florida.

Baseball Factory is proud to have worked with these talented young players and we wish them continued success along with an American victory in the Pan American Championships.   Keep building your way to greatness!  For any young players who may be in a position to try out for this team in upcoming years, these nine players are a prime example of the rewards of hard work and dedication.  Once again, congratulations to the 18U National Team players and good luck in Colombia!

“The NTIS talent pool has consistently grown deeper each year,” said Rick Riccobono, USA Baseball director of development. “It makes our job as talent evaluators that much tougher, which ultimately is a good problem to have as we look ahead to assembling gold medal-winning National Teams in 2012.”

For the third year in a row the announcement was made via an online selection show, which streamed on USABaseball.com. Scores, recaps and rosters from the 2011 NTIS can also be found at the online home of USA Baseball. 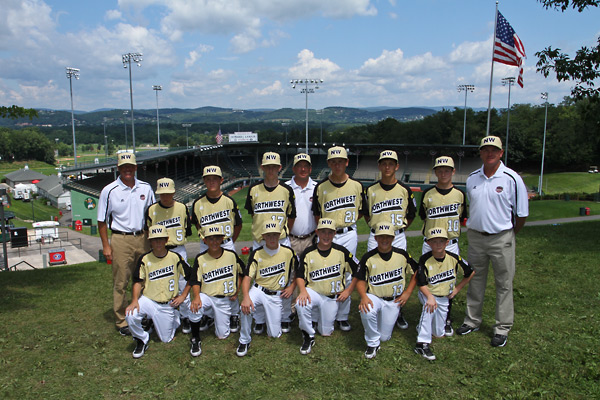 Because of the pending arrival of Hurricane Irene on the Northeastern coast of the U.S., Sunday’s Little League Baseball World Series Championship Game has been moved from 3 p.m. to noon.

The Consolation Game, originally scheduled for 11 a.m. on Sunday, has been cancelled and will not be played.

“In order to have the best chance to complete the game on Sunday, this is the best course,” Stephen D. Keener, President and Chief Executive Officer of Little League Baseball and Softball, said. “This will allow us to take advantage of potentially better weather earlier in the day.”

Little League International consulted with local law enforcement officials before reaching the decision, as well as John Yingling, Director of the County of Lycoming Department of Public Safety. Mr. Yingling assured Little League that those in areas of Eastern Pennsylvania, where the storm may cause damage, will not be without emergency responders and assets because of the World Series.

The extreme eastern portion of Pennsylvania is expected to be harder-hit by the storm, but North-Central Pennsylvania, where the Little League International Complex is located, is not projected to experience violent or extreme weather.

Although violent or extreme weather is not predicted, there is a chance that prolonged rain on Sunday in the Williamsport area would make starting the game impossible, Mr. Wilson said.

“Postponement of the game until Monday is a possibility, if it cannot be played on Sunday,” Mr. Wilson said. “But we will likely not make that decision until Sunday, after it is clear that it cannot be started that day.”

Both of Saturday’s games will be televised live on ABC.

Because of expected news coverage of the effects of Hurricane Irene, Sunday’s World Championship game will be televised live on either ABC or ESPN. Fans should check with local listings closer to game time.

“If it is possible, under acceptable conditions, to play the World Championship on Sunday, we will do so,” Mr. Keener said. “We know many people have traveled to the Williamsport area to see this event’s championship, and it is our intent to get a World Series Champion on Sunday if at all possible.”

USA has clinched a spot in the championship game

AGUASCALIENTES, Mexico–The 16U National Team beat Venezuela Friday, 18-17 (10 inn.), on a walk off sacrifice fly to clinch a spot in the gold medal game at the IBAF World ‘AA’/16U Youth Championships.

Venezuela was in control early after it used a big top of the second inning to take a 5-0 lead. In the inning it had five hits and capitalized on three U.S. errors. The U.S. would get a couple of those runs back in the bottom of the third. In the bottom of the frame it also took advantage of a couple errors mixed in with three hits, including an RBI single by Willie Abreu, to make it 5-2.

Venezuela would quickly extend the lead back to five, 7-2, in the bottom of the next inning when it once again took advantage of a Team USA error. However, the U.S. would storm back to within one run, 7-6, when it scored four runs on two hits in the bottom of the fourth. In the inning, the U.S. would benefit from a walk, a batter hit by a pitch, an error, and three wild pitches.

After the two teams exchanged runs in the fifth inning to make it 8-7, Venezuela used its second five-run inning of the game to go up six, 13-7. The lead would be trimmed to four in the bottom of the seventh, 13-9, when Austin Meadows, who earlier blasted an RBI triple down the left field line, scored on a wild pitch.

Team USA got its first lead of the night in the bottom of the eighth when it had a five-run inning of its own to take the lead, 14-13. In the inning, four hits and a pair of walks led to the runs. Zack Collins and Meadows each had two-RBI singles. The U.S. couldn’t nail it down in the ninth and allowed Venezuela to regain the lead, 15-14, after a couple of runs. However, Team USA forced extra innings when Bryson Brigman slapped a single through the left side, scoring Hunter Mercado-Hood.

In extras, the two teams used the international tie-breaker rule where runners are placed on first and second. Venezuela scored two runs in the top of the tenth to put the pressure on the 16U National Team, but it would respond with a pair of runs of its own before a sacrifice fly by Abreu, that scored Meadows, gave the U.S. a walk-off win.

Winning for the U.S. was Jordan Sheffield. Sheffield came in during the tie-breaker inning and only allowed two unearned runs to give the U.S. the chance to win in the bottom of the inning. Taking the loss for Venezuela was Victor Ramirez. Team USA had seven players with multi-hit games: Brigman, Riley Unroe, Meadows, Collins, Abreu, Arden Pabst, and Jake Jarvis.

GOING FOR GOLD:With tonight’s win, the U.S. has clinched a spot in the IBAF World ‘AA’/16U Youth Championship Game. The game will be Sunday at 4:00 p.m. ET in Lagos de Moreno, Mexico.

MIGHTY JOE THE YOUNG:Joe DeMers, who has not even started high school, came into the game in the top of the sixth inning with two outs and a runner in scoring position. He did not allow the runner to score and went on to pitch 2 2/3 innings in relief.

COMEBACK KIDS:The U.S. was in unfamiliar territory tonight. After the bottom of the second inning it was trailing. It has not been trailing after the bottom of an inning since it trailed going in to the top of the fifth inning in the first game against Australia.

ON DECK: Team USA will continue with second round play against the #3 seed from Group-B, Japan, Saturday at 8:00 p.m. ET. The game will be at Lagos de Moreno.

BEND, Ore. — “Troy Viola on the hill, gets the grounder to second baseman Cam Davis. A snap throw over to first — and it’s Oregon, Bend South Little League beating Washington 4-3! And Oregon is headed to face Montana in the Northwest Region final on Saturday!” called the ESPN announcer during their live broadcast on Thursday night.

And with that, the 11- and 12-year-olds had clinched a berth in Saturday’s championship game against Big Sky, Mont., at the Little League Northwest Regionals at San Bernardino, Calif.

Darryl Firstedt was playing center field in that game.

The Kearney Little Leaguers have the pitching and the defense. If they can find a three-run homer, look out.

Saturday night, the Kearney youths will face Harney Little League of Rapid City, S.D., in an attempt to become the first Nebraska team to participate in the Little League World Series at Williamsport, Pa.

“They definitely know” Nebraska has never had a World Series participant, Kearney coach Mike Koski said. “The kids know a lot about this stuff. … They’re pretty excited about it.”